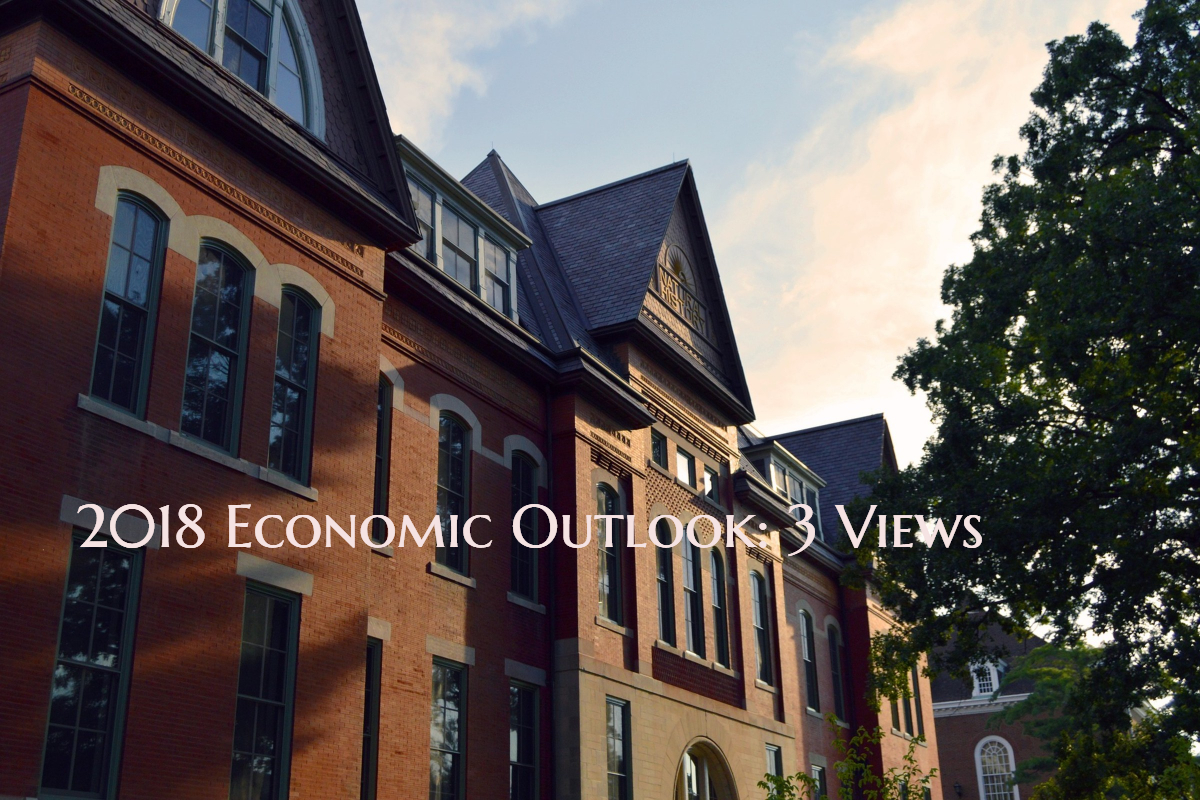 It’s been said you can find two economists who have totally different views based upon the very same set of data. From the Conference Board to Forbes to Goldman-Sachs just to name a few, but they all view the coming year a little bit differently. How so? While most economists don’t think we’re in for a recession, or maybe a one in seven chance according to a recent article in the Wall Street Journal, even the most steady of economies can get blindsided based upon events totally out of our hands. The Fed can tweak the cost of funds every six weeks or so and maybe even put out some classic cryptic Fed message but even the best of plans can get derailed due to geopolitical events around the world. But such events can’t be predicted with much accuracy so let’s put aside any such third party events aside and take a look at what might happen with our economy in the coming year.

Growth is measured in terms of a country’s Gross Domestic Product, or GDP. There are other metrics that can be used to take the pulse of an economy such as unemployment, job creation, wage growth and inflation just to name a few. But the GDP number is the one economists look at the most when getting a handle on an economy’s past, current and future health. GDP takes into consideration “personal consumption expenditures,” business investment, government spending and trade. In plain speak, GDP is the sum total of the value of all goods and services produced here in the United States.

A report released by Goldman Sachs published just last November predicts global GDP to rise to 4.0% while the United States will increase to 2.5%. Deloitte’s Insight newsletter released last fall also predicts a similar number ranging from as low as 2.0% to 2.5% in the U.S. The Conference Board’s assessment for 2018 growth comes in at 2.8% while Kiplinger’s forecast released in January of this year thinks GDP will hit 2.6%.

You’ll notice the numbers are very similar but still a bit different. What really drives the economy is consumer spending. That’s the personal consumption expenditures mentioned earlier. The more goods and services consumers buy the more our economy grows. Consumer spending is carefully analyzed to get an idea about how the consumers feel about not just the current economic environment but how confident they feel about the future. Strong consumer spending indicates consumers aren’t

worried as much about future economic conditions and instead of socking their earnings away in a savings account somewhere they’ll spend more, knowing there’s more money coming in from their job or their business.

What does the GDP number mean for homeowners or those thinking about buying a home? A GDP number won’t directly affect a decision to buy or to refinance an existing mortgage. Instead, the Federal Reserve monitors GDP on a monthly and quarterly basis and keeps this information handy when they meet every six weeks or so. A stronger GDP along with a strong demand for goods and services typically drives up prices for those same goods and services. In a stronger economy businesses can charge more quite frankly because they can. When consumers spend more and compete for the same goods and services that results in a typical supply vs. demand curve. The more demand, the higher consumers will pay until it reaches a point where sales slow and consumers slow down their spending. But up until that point, more demand and higher prices mean inflation could be on the horizon and that’s what the Fed wants to keep under control.

Inflation hasn’t been an issue for quite some time and the Fed has essentially sat on the sidelines as it relates to increasing interest rates with just two moves in the past 12 months. In the Kiplinger report, they see the Prime Rate moving up to 5.0 to 5.25% by the end of 2018 with the average 30 year fixed conforming rate moving from around 3.95% today to 4.4% by the end of the year. A recent article in Fortune Magazine predicts inflation will remain at a standstill throughout the year and hold firm a 2.8 percent.

Higher rates steal buying power from consumers and if the Fed does indeed make additional increases this year, the cost of money will rise. For those looking at taking out a home equity loan for a remodel or a home equity line of credit that means qualifying for a lower amount when rates increase by 0.50%.

The takeaway? Most economists today see a GDP level ranging anywhere from 2.0 to 2.6% and the Fed looking at perhaps two more 0.25% increases in the Federal Funds rate. That all boils down to zero likelihood of a rate drop by the Fed and by this time next year interest rates will be at least 0.50% higher than they are today.

The author, Matt Herbolich, MBA, JD, LLM NMLS #1649154, is a senior loan officer at USA Mortgage, a division of DAS Acquisition Company, LLC NMLS# 227262. Contact Matt Herbolich, MBA, JD, LLM for your Real Estate and Mortgage Questions. USA Mortgage is a direct lender with no lender overlays on Government and Conventional Loans. Mr. Herbolich can be reached 7 days a week at 888-900-1020 by phone, on his cell at 786-390-9499 by either phone or text, or by email mherbolich@usa-mortgage.com.

How Does the Trump Tax Plan Really Affect Homeowners?

Cash Out Refinance of Condotel Units

How to Apply For W-2 Only Mortgage Loan In California